Toshiba Tecra A10, M10 laptops are in Store Now 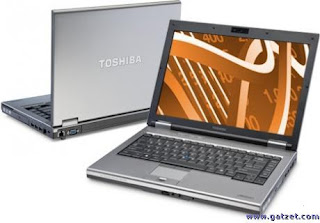 If you’re thinking of buying a new laptops, perhaps these two latest edition from Toshiba giant can be a good option. With a price of $1249 , which is a bit lower than the initial offer, for the A10 and $1100 for the M10, these two have all the things jammed into them.

Check out their specs, and see whether you agree that it is worth the price tag.

The Tecra A10 has a powerful 2.4GHz Intel Core 2 Duo P8600 processors, built-in camera, 2GB DDR2 SDRAM (fast enough to process any data), a whooping 160GB Hard disk with a 7200rpm disk speed, and others stuffs such as Bluetooth, Toshiba’s Easy Guard Technology and a Li-on battery that you can use for 3 hours. Windows Vista Business comes with it and if you think that it is too fancy, you can have it downgraded to the more modest XP Professional. A 15.4-inch screen with WSXGA+ resolution and for the video card it has an NVIDIA’s Quadro NVS in it.

As for the Tecra M10, it has all the specs the A10 has except for the screen and the video card. The M10 has a smaller 14.1-inch TFT LCD with WXGA+ resolution and an Intel GM45 integrated graphics chip for the video card. And the hard disk runs a little bit slower, 5400rpm.


Posted by Muhammad Waseem at 9:30 AM No comments: 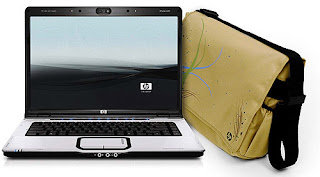 It looks like HP is doing its part for the environment and, possibly, thieves with its new Pavilion dv6929wm laptop, which does away with the usual excessive packaging and will instead be sold simply in a specially designed "HP Protect" messenger bag. That idea actually came about through a Walmart initiative that asked companies to produce a product that would reduce environmental impact, which HP won, and has now resulted in the laptop being sold exclusively at Walmart stores and Sam's Club locations. Unfortunately, there's not much word on the specs for the laptop itself just yet but, at $798, we wouldn't exactly expect a powerhouse.
Posted by Muhammad Waseem at 11:52 AM No comments: 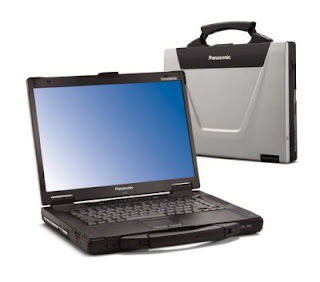 The Panasonic Toughbook CF-52 follows the long line of Toughbook laptops that are favored by the military for their well, toughness. This laptop possesses the same rugged features and looks but this time with more consumer appeal. At $3,300 you get the same old tough laptop but this time with the modern features possessed by its competitors. It sure has an intimidating street price but quality does have a price.

With an Intel Core 2 Duo T7300 processor with a speed of 2GHz the Panasonic Toughbook CF-52 is well-equipped and is capable of running all the basic program you need for your business and more. It has a 1GB RAM and an unbelievable 400GB storage capacity. That and the almost giant 15.4-inch widescreen display could perhaps explain the heavy 7.4 pound weight of this laptop. It promises great images with the ATI Mobility Radeon X2300HD graphics card.

Posted by Muhammad Waseem at 4:07 AM No comments: 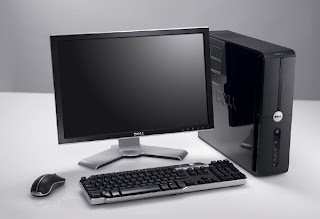 IBM has unveiled the ultimate mobile workstation in the new IBM Lenovo ThinkPad W700 laptop. This new laptop is certainly an impressive piece of work on its own, with its imposing 17-inch 1,920-by-1,200-pixel primary display, complemented by a foldable 10.6-inch LED backlit secondary display with a resolution of 768 by 1,280 pixels. The ThinkPad W700 laptop is powered by one of Intel’s Core 2 Duo, Core 2 Extreme and Core 2 Quad Core Q9100 processors, and comes equipped with Nvidia Quadro Express graphics, 4 GB RAM, 4 GB Intel Turbo Memory and 64 GB SSD. Additional features of the ThinkPad W700 laptop include an integrated webcam, an onboard WACOM palm rest digitizer and pen, dual-link DVI, WiFi, and ThinkPad layered security, all wrapped neatly into a 10.9-pound package. The ThinkPad W700 laptop with dual display is available starting this month and continues to roll out through January 2009. IBM.

Posted by Muhammad Waseem at 12:59 PM No comments: 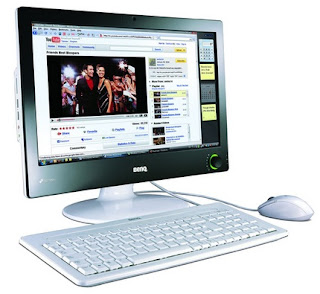 BenQ has announced the nScreen i91 all-in-one PC. The i91 has an 18-inch LCD screen with a 16:9 aspect ratio and is set for a March or April debut in Japan and Australia and will retail for around $517. The machine runs on an AMD Sempron 210U processor, has 1GB RAM and 160GB HDD.

The i91 supports HD playback, 1.3 megapixel camera, Wi-Fi, 4-in-1 card reader. The nScreen i91 has a virtual magnifier function that makes reading easier for senior citizens. The senior mode lowers high audio frequencies to improve sound clarity. Upgrading the computer is easy, hard drives and memory can be added simply by opening the back cover that is not screwed on.

Instant photo-sharing and a VoIP videophone are neat multimedia features. An average power consumption of 30W is 80% less than what corresponding desktops use
Posted by Muhammad Waseem at 4:02 AM No comments:

Posted by Muhammad Waseem at 1:54 AM No comments: 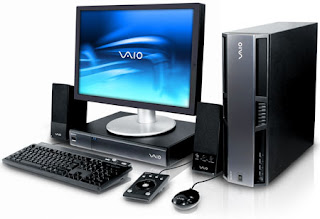 Sony has taken the wraps off a desktop system that contains not only system unit but two, one for the bulk of the PC's innards, the other for the optical drives - one of which is a Blu-ray Disc unit.

The system unit has room for up to four more SATA hard disks, and there are three open PCI-Express slots capable of taking full-length cards.

The main unit also incorporates Gigabit Ethernet, which is realistically something you'd connect and leave. Not so the front-facing four USB and one four-pin Firewire ports, so you're either going to be reaching under the desk every time you want to connect a USB key or digital camera, or you're going to want the system unit on your desk too, which kind of defeats the object of the split design.

Still, the system does come with a pair of colour-coordinated speakers and a standalone jog-dial control to use with the bundled Adobe Premiere Pro 2.0 video editing software. The RM1N runs Windows Vista Business.

Posted by Muhammad Waseem at 9:31 AM No comments: 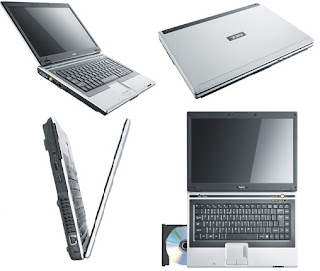 NEC is offering integrated piece of mind in the form of new built-in hardware technology with its Versa line of laptops – the Versa M370 laptop, Versa P570 laptop and Versa S970 laptop. NEC’s Client Products Marketing Manager, Olivier Chevance, said, “With so many high-profile data breaches making headlines, securing sensitive information at the source - the laptop itself - is fast becoming a top priority for most organizations. That’s why NEC Computers is providing its customers with the most advanced security and management available today within its Versa line of laptops.” The new and improved security features include the hardware-based Trusted Platform Module security chip, encrypting disk drive and client management software which will protect your data, even in the case of a lost or stolen laptop. That means that even if your machine is in the wrong hands, your information will be safe. The system combines Seagate and Momentus Full Disc Encryption hard drive with DriveTrusto technology, managed by Wave's Embassy software, and the result is an easy-to-use system enabling security and authentication for lost, stolen or recycled laptops. NEC
via Laptops Arena
Posted by Muhammad Waseem at 11:44 AM No comments: 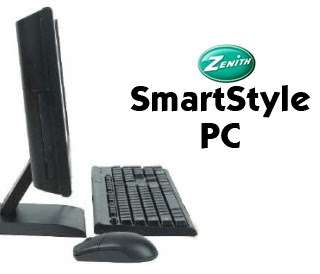 The CPU is engrafted behind the LCD. It’s possible to hang the monitor on the wall, or even attach it to a table top computer. That is pretty cool.

Configuration/Specs: The Zenith SmartStyle PC runs on an Intel Dual Core T2130 Processor and has an 80 GB hard disk and 1 GB RAM. Speakers are in-built, and networking slots are present. Though the SmartStyle PC lacks an optical drive, there’s a slot available to install any DVD burner. 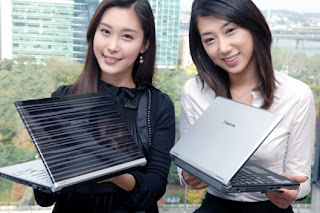 The new LG XNote P310 laptop is the company’s newest premium laptop, recently unveiled to an enthusiastic throng of laptoppers in Korea. The XNote P310 laptop doesn’t deviate from its predecessors when it comes to looks – why mess with a good thing? The 13.3-inch laptop sports a clean, sleek style, available in a simple aluminum finish or with the rose-black detail. Inside is where you’ll find the laptop’s “premium” claims to fame. The XNote P310 laptop features a Centrino 2 platform with a powerful 2.53GHz Core 2 Duo T9400 processor, NVIDIA GeForce 9600M GT graphics, 3GB DDR3 memory, 2GB of Intel Turbo Memory and a 320GB HDD. Details are not yet available as to price or release date. LG
via Aving
Posted by Muhammad Waseem at 12:37 AM No comments:

Philippine-based laptop maker Red Fox has added to its hot little laptop lineup with the Red Fox 1020i Wizbook ultra-mobile laptop. The 1020i Wizbook mini laptop is available in white, black or an eye-catching red-and-black combo finish. Under the hood the 1020i Wizbook laptop sports a peppy and low-power-consumption 1600MHz Intel Atom processor, 1GB RAM, an 80GB HDD and Windows XP operating system running the show. The 1020i Wizbook ultra-mobile laptop sports a 10.2-inch display with a resolution of 1,024 by 600 pixels, and comes with a pair of integrated speakers and a built-in webcam. Connectivity includes LAN slot, wireless module, PCMCIA slot, card reader, headphone out, mic in and DC in, and two USB ports. The new Wizbook laptop tips the scales at around 2.7 pounds. Pricing is still being kept under wraps. Red Fox

Posted by Muhammad Waseem at 12:58 AM No comments: