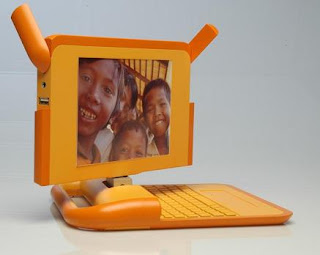 Five million to come by the end of the year, and 2500 to be sent out by the end of the month, the OLPC ‘XO’ laptop still costs US $150 to manufacture, US $50 more than the goal of the US $100 laptop. One Laptop Per Child (OLPC) representatives say they’ll keep the specifications of the OLPC laptop stable to drive costs down, rather than add new features, to reach the US $100 goal.This is expected to be achieved by 2010, when 150 million XO laptops are expected to be shipped across the globe – something that’s been said to be worrying Microsoft a little due to the fact so many laptops out there won’t be running Microsoft Windows, although how seriously Microsoft takes this is unknown – it was reported several months ago that Nicholas Negroponte had invited Microsoft to develop a version of Windows suitable for the device and that Microsoft was looking into it.
Posted by Muhammad Waseem at 8:41 AM