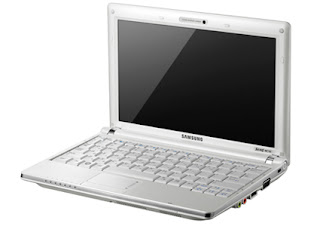 Over the last decade, you've probably lusted after some sleekly designed Samsung cell phone, MP3 player, or flat-screen TV, but unfortunately you've never had the chance to lust after a Samsung laptop. That's because, unlike the rest of the world, Samsung's laptops have never been available in the U.S. – until now. Today, Samsung unveiled a new line of high-end portable computers, which will be available online at sites such as Amazon.com, NewEgg.com, Buy.com, and TigerDirect.com later this month. We got an early hands-on with the laptops when Samsung stopped for a visit a couple of weeks ago, and were impressed with the look and feel of the new models. The snazziest of the new models are the 13.3- and 14.1-inch ultra thin X360 and X460, which are designed to go head-to-head with the MacBook Air and the Lenovo X300. These two-toned beauties are just under three pounds and are said to have a superlative 10 hours of battery life, despite having SuperBright LED backlit displays. We're curious to try out the battery life for ourselves, but 10 hours is about as good as it gets. All in all are slick-looking laptops that won't take up much space in your backpack, but we wish they had built-in mobile broadband capability, as the Lenovo X300 and even smaller Sony TZ series do.
Posted by Muhammad Waseem at 4:56 AM